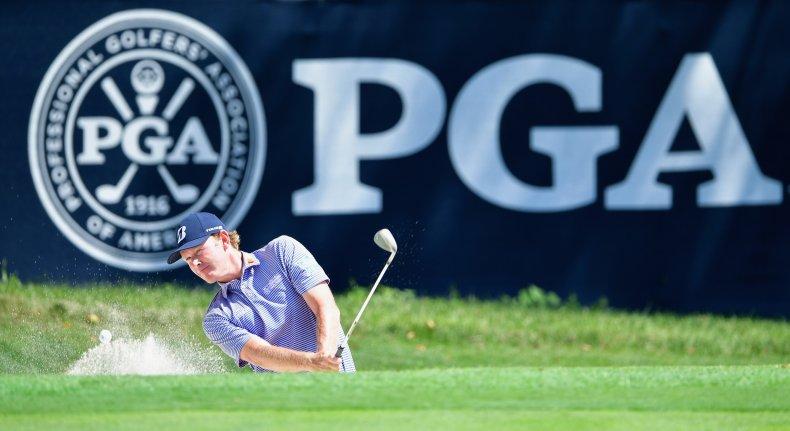 The world of golf is changing. And quickly.

Evidence of that came 30 minutes after the most lucrative event in the sport’s history began at Centurion Club, near London.

An already tumultuous week, which has seen players resigning from the PGA Tour while being asked if they are “Saudi stooges” in uncomfortable news conferences, took a significant turn at 14:45 BST.

The PGA Tour announced it was suspending 17 rebel members who have chosen to play in this inaugural $25m Saudi Arabian-funded LIV Golf Invitational event.

Within seconds LIV, which is fronted by former world number one Greg Norman, hit back, calling the PGA Tour “vindictive”.

All the while, the golf tournament that is shaking the game to its core was under way.

A fleet of London black cabs had ferried the 48 players to their respective holes as they all teed off simultaneously across the course at 14:15, 17 of them oblivious to the PGA Tour’s decision that would be waiting in their email inbox.

Six-time major champion Phil Mickelson and former world number one Dustin Johnson are among the biggest names in the sport to have been seduced by the Saudi millions – with rumours circulating that Bryson DeChambeau is to play in the second event in Portland, Oregon at the end of June.

Mickelson has not denied speculation he is picking up $200m (£160m), with Johnson getting a reported $150m in appearance fees for joining the series which is being bankrolled to the tune of £1.6bn by Saudi Arabia’s Public Investment Fund (PIF).

The Americans were paired together on Thursday, with Mickelson, who is ending a four-month self-imposed exile from the game after calling the Saudis “scary”, flashing his trademark cheesy smile as he received a rapturous reception on the first tee.

A fly-by of vintage aeroplanes and buglers dressed as Beefeaters heralded the start of the tournament, with Johnson hitting the first shot in front of hundreds of fans lining the fairway to watch the marquee pairing, who signed for one-under-par 69s.

Ticket sales have undeniably been slow though.

The tournament has a cap of 8,000 fans per day but players such as Lee Westwood have been advertising promo codes for free tickets on their social media channels.

And the majority of fans I spoke to had taken advantage, eager to see the likes of Westwood and his European Ryder Cup team-mates Ian Poulter, Sergio Garcia and Graeme McDowell, while also trying to get their heads round the team element that organisers are so keen to push.